To better understand, we’ll go over 7 important topics on black holes. This will tie together all the basic known components in a comprehensive fashion. Then, you can more clearly in detail see how black hole jets form.

Important Note: my explanations are oversimplifications of the process. While a lot of the existing discussions even from experts are theory.

There’s so much we don’t know about black holes. So my shared points are both theory and my own thoughts with plenty of generalizations. I also omit many complexities, which stem from general relativity.

Even more, what we know today as absolute truths may be completely wrong. Our understanding of physics must improve, for us to better understand black holes.

A method to extract energy from a rotating black hole. For this method to work, we need the following:

Important Note: when atoms move very fast, they knock electrons off each other. Thus, ionized atoms are missing one electron or more. What’s left, are electrons and atomic nuclei. This makes plasma an electrically charged gas. Naturally then, electric and magnetic fields can affect plasma.

A region of space where the curvature is so high nothing can escape. Not even light. Confusing, right?!

Let’s pick Einstein’s brain to better understand. Einstein’s general theory of relativity describes gravity as the curvature of spacetime. So, anything with a mass will bend the four-dimensional cosmic grid.

This sounds sci-fi, but certain predictions by Einstein, we’ve verified. To explain, gravity is a force of attraction between masses. Yet, light, which is massless, bends around massive objects.

How does light bend from the force of gravity you ask? It doesn’t!

Light travels on a straight path. For light to bend, spacetime must be distorting. We then conclude mass distorts spacetime. And with supermassive black holes, spacetime distorts so much, light can’t even escape.

#3 What’s the event horizon of a black hole?

This is the point of no return for a black hole. If anything crosses the event horizon, the outcome is a singularity. In other words, nothing escapes. Not even light.

Important Note: singularity represents a region of space with infinite curvature. With a black hole, it’s the center point. This point contains a black hole’s mass in an infinitely small space.

Accretion discs are materials, which orbit objects with strong gravity. The materials include gas, dust, plasma, and other stellar debris, made of the following:

Most accretion discs form when dense objects suck material off other objects. For example, when a star orbits a black hole, as pictured below. 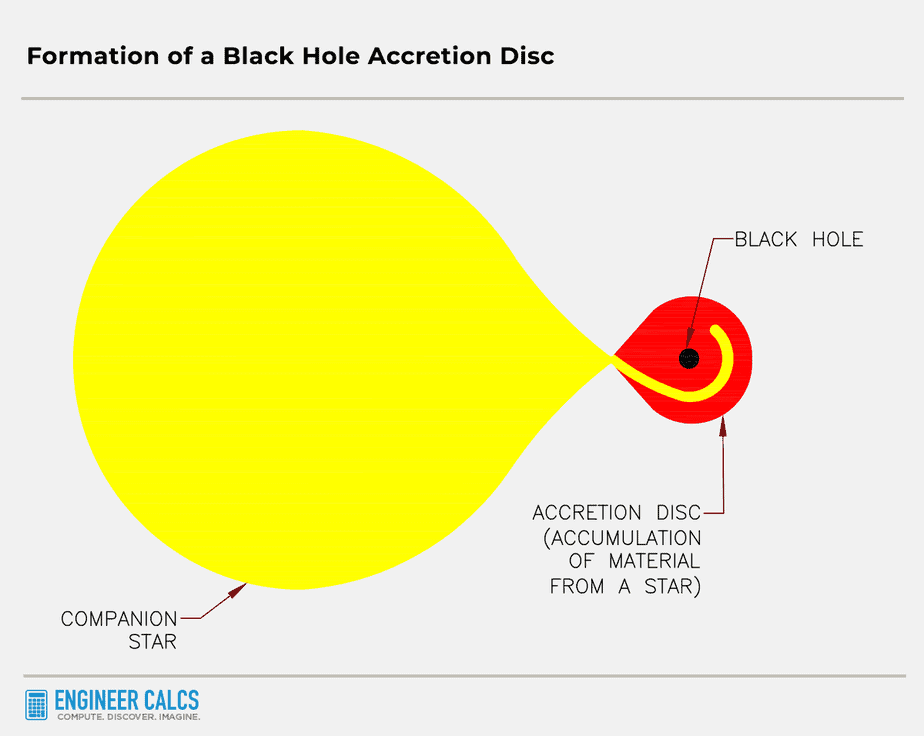 Important Note: accretion disc material can heat up to thousands of degrees. This happens right before the material reaches the event horizon. This process produces X-rays.

With larger black holes, the material temperatures can even reach millions of degrees. These extreme temperatures release gamma rays. And disc radiation among other things is how we detect black holes.

The accretion material gets very close to a black hole, but not close enough to instantly fall inside. This is despite black holes having very strong gravitational attractions.

The reason is, accretion material moves extremely fast with angular momentum. Think of accretion material like the International Space Station (ISS). The ISS needs to travel 17,150 miles per hour or it’ll fall out of Earth’s orbit.

Important Note: if Earth stopped moving, it’d fall into the sun. The Sun’s gravity would pull it in. But, Earth moves sideways relative to the Sun at around 2 miles/second. This is fast enough for Earth, to avoid falling into the Sun. Yet, not too fast to escape the Sun’s gravity and leave the solar system.

It’s like a tetherball. Imagine the post is the Sun and the ball is the Earth. While the rope connecting the ball and post is the force of gravity. When you hit the ball, it spins around the post. And if there’s no air or rope friction, the ball would forever spin around the post. This is how Earth orbits the Sun in the vacuum of space.

#5 How does accretion material fall into a black hole?

As we learned, accretion material wants to stay in orbit around a black hole. The angular momentum resists the collapse of material beyond the event horizon.

Over time though, more material will accumulate in the accretion disc. While materials at adjacent radii, orbit at different velocities. As a result, atoms will inevitably collide producing friction and heat.

These collisions cause the material to lose angular momentum. The mass then moves inwards and atoms lose electrons becoming ions.

A changing magnetic field then creates an electric field. This is a cyclic feedback process, where one field constantly creates the other. What you have is an electromagnetic field.

All these forces cause matter to flow in complex unpredictable ways. In return, the material falls closer and closer to the black hole. While near the event horizon, the material travels faster.

In this entire process, the density of the material increases near the event horizon. Here, atoms collide more violently, as the heating effect increases too. Charged particles then eventually fall into the black hole. It’s like a domino effect.

#6 How do black hole jets form from magnetic fields?

To create these amazing black hole jets, we need the following:

The power source is the rotating black hole. It spins accretion material at high speeds near the speed of light. The material can heat up to several million degrees celsius. This rise in temperature takes place in the inner accretion disc near the event horizon.

Important Note: the dynamo in accretion discs is not fully understood. The source may be the differential rotation of material in the accretion disc. Or maybe, new poloidal flux merges with and augments the original poloidal flux.

Similarly, we don’t fully understand Earth’s dynamo effect. We know liquid separates the inner core from the mantle. In return, they spin at different rates. While charged particles in the outer core move and generate electric current. This generated current in the liquid metal then creates Earth’s magnetic field.

Even more, a rotating black hole drags space. Imagine how water twists when you flush your toilet.

This effect from general relativity on spacetime is frame-dragging. A black hole’s strong gravity and rotational forces, locally rotate spacetime. 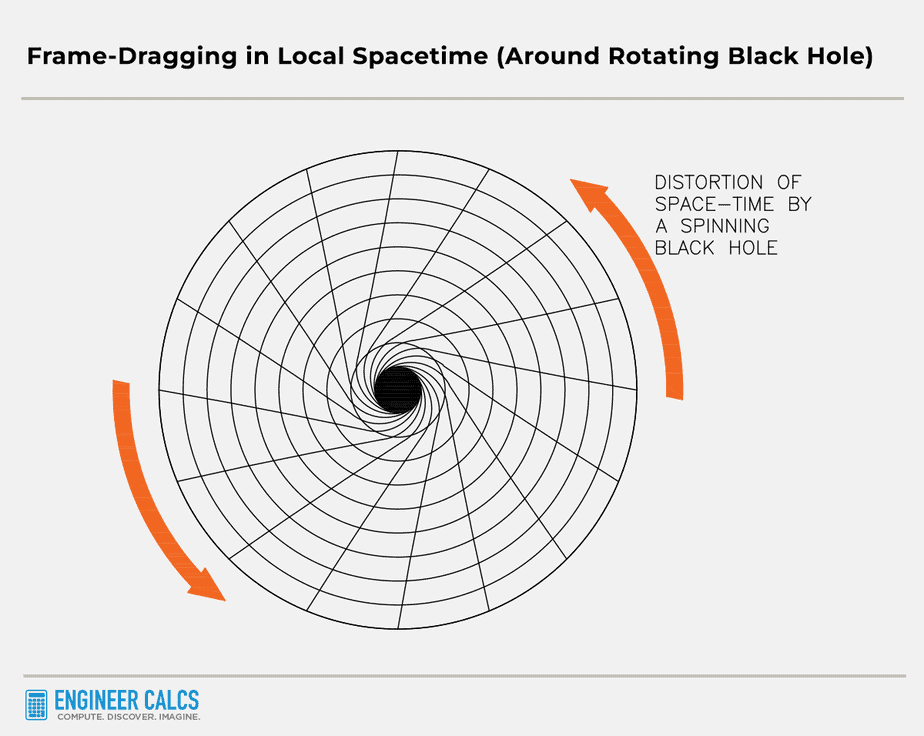 So, the magnetic field lines become denser and stronger closer to the event horizon. They become like a tangled coil of wire.

The flux conservation law shows field lines disconnected from their source can’t escape. These field lines become squeezed inward and forced to thread the black hole. As a result, they’re held in the accretion disc. 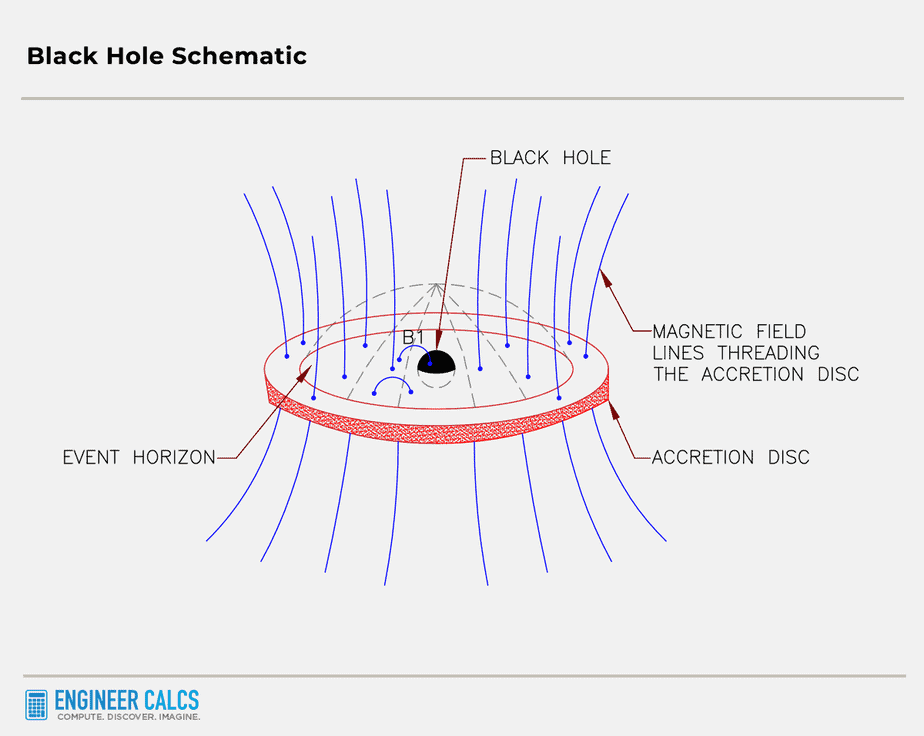 The magnetic field would completely go away in the following scenarios though:

Similarly, Mars once may have had a magnetic field. But since it couldn’t maintain its molten core, its magnetic field went away.

The magnetic field lines wrap around the accretion disc’s axis of rotation. This creates a helical magnetic field in the Z direction. In this violent magnetic dance, much of the material the black hole eats. But some material is magnetically launched in jets at nearly the speed of light. 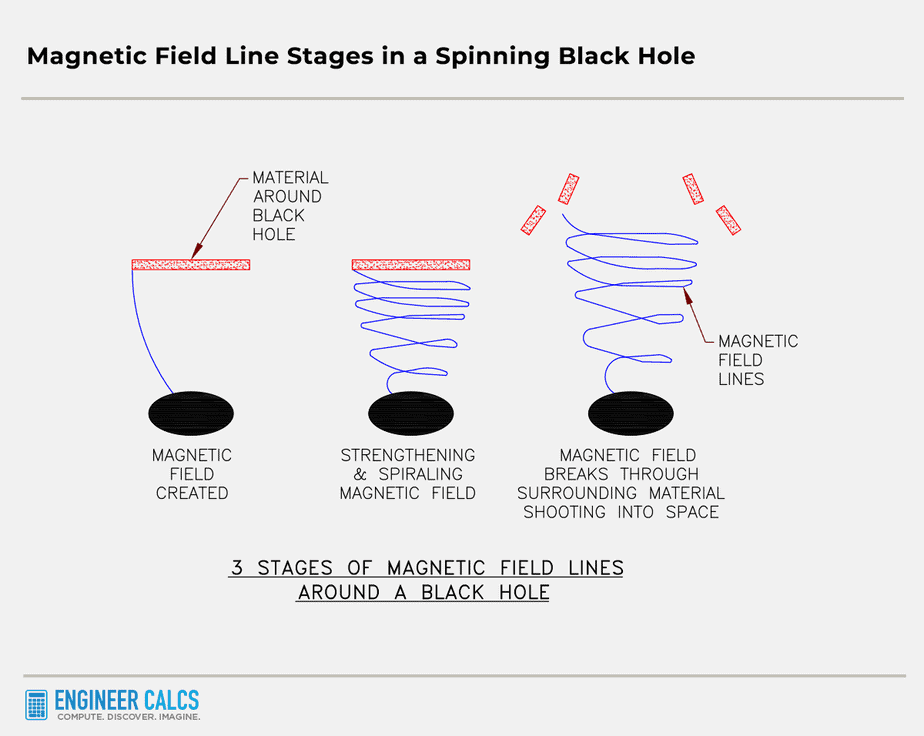 This shows the unworldly strength of the magnetic fields. It takes tremendous force to rip charged particles from a black hole’s gravitational grip.

So charged particles, which enter the magnetic field, accelerate away in the jet. This direction of launch is because ionized matter can’t cross field lines due to the EMF. The mechanism is like a synchrotron.

To point out, objects not traveling in straight lines accelerate. This is important because accelerating electrons emit radiation, such as gamma rays.

For this reason, the plasma travels on the axis of the magnetic field’s rotation. Again, think of a synchrotron. Charged particles remain on set paths made by the helix-shaped magnetic field lines.

This explains the perfect alignment of black hole jets. Where plasma shoots out both ends of a black hole. While the twisting magnetic field transfers rotational energy to black hole outflow. The end result I compare to the following simple electrical circuit: 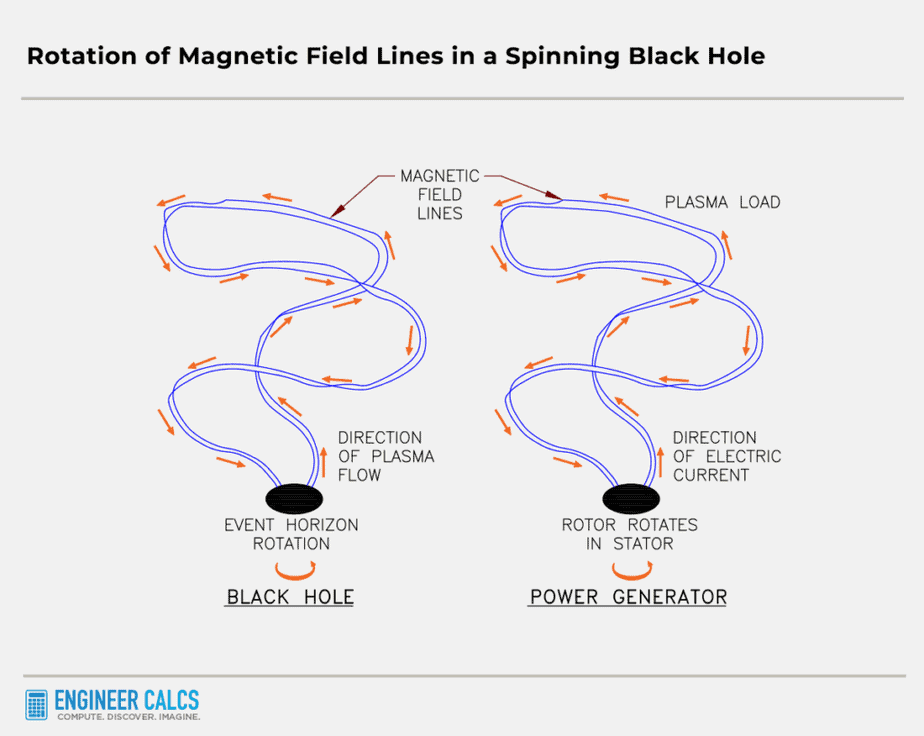 #7 How much energy does black hole radiation release?

The amount of energy produced by black holes is what’s so appealing. And I’m not talking about what’s inside the black hole. Rather, the material fired out from the accretion disc, the radiation.

To analyze the energy produced, I will preface with mass is energy.

, energy equals mass times the speed of light squared. So, the conversion of matter into energy is unworldly from a black hole’s accretion disc. It can reach as high as 42%, which may not seem like much.

But, the Sun only converts 0.7% of the mass of hydrogen into various wavelengths of light. The remaining 99.3% settles to helium.

Even more, our only power source for converting matter to energy is nuclear power. We convert 0.1% of the mass of Uranium-235 into energy. While 1 kilogram of matter converted to 42% energy, would yield over 10 terawatts-hours of energy. We could power all of Earth for 30 minutes!

Capturing this power is entirely another story. But just maybe, there’s an alien civilization who figured out how to tap into this endless energy source…

“How do black hole jets form” wrap up

These astrophysical jets are not only amazing but a potential near-infinite energy source. It would be sci-fi on 10x steroids if we can one day harness this unworldly power.

What are your thoughts on how black hole jets form? Do you think we can ever tap into black holes as an energy source?