Is engineering worth it? If you enter the profession for the right reasons, it’s well worth it. It’s interesting work without a pay ceiling.

To preface, I know some engineers who would disagree with my points. But in the end, you get out what you put in. What I mean is, if your engineering job isn’t checking off these 6 items, then search for a new job, or create a job. Better yet, level up to make yourself a magnet for better opportunities.

#1 Scratch a childhood itch of curiosity and exploration

If you’re a nerd at heart, engineering can be the most awesome escape. And I say this in the most complimentary way.

You’ll scratch a childhood itch by working on incredible engineering projects. All the while, deeply exploring and designing around subjects you’ve always dreamed about.

When you have a knack for a subject, you need to constantly feed it. Otherwise, you become agitated and your motivation dips. You’re then always clawing to find a missing piece of yourself, as you feel empty inside.

But, if you become an engineer for the following wrong reasons, you won’t even have the itch to scratch:

Over time, you’ll become miserable as you fade out of the profession. You may even become one of the many people on Reddit and Youtube who say engineering sucks.

It’s important to note, even the most interesting engineering job will have low points. Don’t get fooled by Hollywood’s distorted portrayal of engineers.

If you know enough engineers, you’ve probably heard of some jobs, which can be downright boring. For example, pushing paper around all day long or counting screws. It sounds crazy, but I know an engineer who only focuses on screws in designs. And let me tell you, he’s not too fond of his everyday work.

Now, if you have even an ounce of motivation inside of you, you can land an interesting job. Or, just climb company ranks until you land a sweet gig.

After I graduated, I did a lot of low-level vanilla engineering work. I didn’t get my feet wet in true design until several years into my career. But when the design floodgates opened, I worked on endless high-budget engineering projects. The same projects I watched in awe as a kid with my dad on the Discovery Channel.

It’s one thing to watch or read about a mega engineering project. But it’s a completely different animal to sink your teeth into the hairy project details and make project-critical decisions. I loved it!

Some people are always hunting for the next big challenge. It’s the same trait, which makes a few people want to travel to the Moon and climb Mount Everest.

Now, engineering won’t physically drain you like climbing Mount Everest. But, it can stretch you mentally to your limits if you allow it to.

Depending on your level of thirst for challenges, you can find the right job for you. Whether it be designing small widgets or working on cutting-edge rocket technology. Around every corner, there are new problems begging for engineering solutions. And this is what makes engineering so amazing.

You can always make things faster, stronger, more efficient, and cheaper. There’s no shortage of challenges to stimulate your mind and learn cool new things.

Many would argue engineers are underpaid. They claim you hit a pay ceiling fairly quickly in your career. Once you hit the 10-year mark, you may only get a 3% raise every couple of years.

However, in most instances, the blame goes on the engineer. If you stop leveling yourself up as an engineer, you’ll never maximize your income. You’ll become an average engineer, earning an average salary.

It’s no different than the last man sitting on an NBA bench. They earn a minimum salary, while the stars make the big bucks. And yes, some athletes, like engineers, are naturally gifted and they have an inherent edge. But even the last man on the bench can climb the ranks through endless training.

The below table lists the average starting engineering salaries based on 2013 stats. You can see how the salaries for a 4-year degree are fairly high. 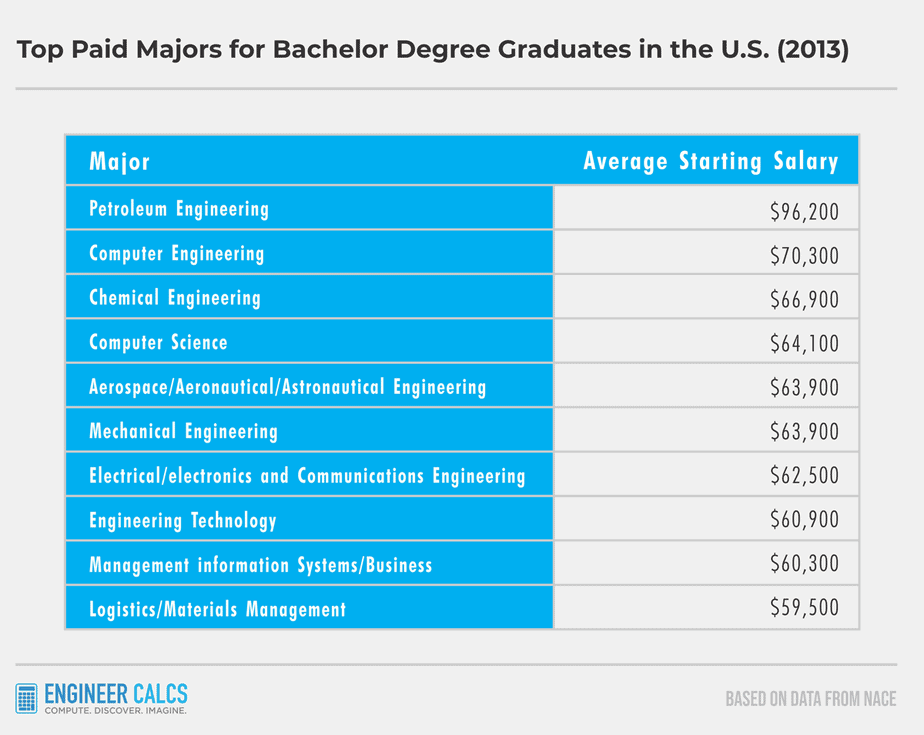 Now, I know some people think anything below six figures is low pay, even when talking about entry-level pay. But for perspective, the average U.S. salary for all occupations in May 2020 was $56,310. And this average salary isn’t for entry-level workers, it includes senior-level workers.

If this wasn’t a big enough dose of reality, let’s turn it up a notch. I know plenty of engineers who make well over $500k annually in a technical role. Of course, these are typically 10x engineers.

The point is, if you’re driven, there’s no income ceiling in engineering. Block out the noise and focus on bettering yourself and constantly leveling up.

#5 Interesting and smart colleagues and customers

“You’re the average of the five people you spend the most time with.”

There’s some truth to this quote. In the engineering workplace, you’re surrounded by awesomely brilliant people. Hopefully, most of the time…

And to be frank, there aren’t many places you can meet large groups of like-minded people. Sometimes even world experts.

It’s insanely difficult unless you have a huge budget and a project to band people together. The best example was when Elon Musk founded SpaceX. He brought together the brightest aerospace minds in the aerospace industry.

And this is a great segue to expound on SpaceX. At SpaceX, you’re surrounded by some of the brightest minds in the engineering world. People who are pushing rocket technology to the bleeding edge. As a result, ideas and solutions ooze out of the building walls, allowing you to endlessly learn and stimulate your mind.

I find this environment to be wildly motivating and inspiring. It keeps me on my toes and allows me to quench my endless thirst for knowledge.

#6 Platform to level up mentally

There are certain jobs where you rarely flex your mind. I’m not hating on burger flipping, but you don’t need to use much brainpower to flip a burger.

Some engineering positions, however, are different animals. You’re confronted with constant high-level problem-solving. It’s the perfect medium to level yourself up through constant challenges.

And yes, I know you can challenge yourself in many different ways in life outside of the engineering sphere. But when your design places millions of dollars on the line with lives at risk, it’s a different ballgame.

As a lead engineer, you can level up your following attributes:

Then, you can apply your newfound skills and abilities to any walk of life. Your new lines of work will seem like a cakewalk, especially with your magnified confidence.

This is why so many company CEOs have a background in engineering. Take notice of the following abbreviated list of high achievers:

“Is engineering worth it?” wrap up

Engineering is 100% worth it if you enter the field for the right reasons. Not only can you fulfill a childhood dream, but you can drive humanity forward.

Even more, you can leverage your engineering skills in just about any other industry. You’ll acquire entrepreneurial and technical skills, which are necessary for success. A powerful skill combo, not easily found elsewhere.

Do you find engineering to be worth it? What makes engineering so unique compared to other professions?