The USS Theodore Roosevelt is a nuclear-powered aircraft carrier. It stands 20 stories above the ocean and is 1,092 feet long with a 196,000 square-foot flight deck.

This herculean ship houses 80-plus airplanes and around 6,000 people for several months. But, how do fighter jets take off from these floating airports?…

To answer this question, we need to first understand how planes take off.

The science behind airplane takeoffs

Bernoulli’s principle says fluids, which move faster than their surroundings have less pressure. Our fluid is air, and the goal is to create less pressure on top of the wings than below, by going fast. This pressure differential creates an upwards force on the wings, lifting the airplane.

On a limited runway though, planes use two unique elements not found in land airports to go fast.

The typical airport runway is 2,300 feet long. While an aircraft carrier has a runway of only around 300 feet. This means planes have 2,000 fewer feet of runway to gain speed to take off.

To compensate, aircraft carriers use steam-powered catapults to create lift. This machinery creates enough force to launch planes from 0 to 170 miles per hour in 2 seconds. To point out, the catapult force differs, based on the following airplane attributes:

If the catapult pressure is incorrectly set though, the following can happen:

Aircraft carriers move fast in oceans while cutting through the air. This can create added airflow on the flight deck when traveling in the direction of a jet’s takeoff. In return, a jet’s required thrust decreases.

With each launch, operators calculate the catapult’s settings by the specific plane type. But, operators also consider these other following variables:

Important Note: launching into the wind, the catapult needs to create greater force. Because oncoming wind reduces a jet’s speed.

To simplify our F-14 Tomcat carrier launch calculation, we’ll disregard these other variables. We’ll just focus on the F-14 Tomcat, Maverick’s (Tom Cruise’s) fighter jet of choice. This incredible jet can sweep its wings backward and forward to do the following:

Important Note: the F-14 wings look amazing, but they were a maintenance nightmare. The high number of moving parts created endless points of failure. Even more, the added hardware increased the jet’s weight.

How fast will the catapult shuttle need to travel to launch an F-14 Tomcat?

According to the Aerospace Web, the max takeoff weight of an F-14 Tomcat is 74,350 pounds (33,725 kilograms). We’ll input this weight into the lift formula to do our calculation.

= density of air in the takeoff region – at sea level, it’s

value is normally determined through experimentation. It considers the shape, inclinations, material density, and flow conditions of a wing. This value gives the performance of airfoils and wings when it comes to lift. In other words, how well a plane can take off.

Using Haw Hamburg, the takeoff lift coefficient for a fighter jet is between 1.4 to 2.0. This value is from Dr. Jan Roskam’s amazing Airplane Design books. In our calculation, we’ll assume a

For the F-14 Tomcat to takeoff, the lift must overcome gravity and equal the weight of the jet. So let’s plug in our values, and solve for

The lift equation tells us the higher the lift coefficient, the slower a plane needs to travel to take off. Not surprisingly, a slower-traveling airplane is safer on takeoff. This is why a high aspect ratio wing is desirable, even more so, on an aircraft carrier, as we’ll soon learn.

What would happen if the catapult system was set to the wrong speed? Say 0.9v, where ‘v’ is the desired catapult speed.

We’ll use our previously calculated F-14 Tomcat values to answer this question. But, we’ll also use the following two jet engine thrust values:

Next, we’ll assume the following:

To start, we calculate how much lift the F-14 produces, by substituting 0.9v into our lift equation.

Once the F-14 Tomcat takes off, the lift on the jet is the following:

The 90% signifies the jet falls with an acceleration of 10.00% of gravity.

Where acceleration due to gravity is

Calculating the time for the jet to fall 60 feet, the height of the aircraft carrier, we have the following:

Important Note: we ignore the increase in horizontal velocity for a few seconds after launch. This increase in velocity does create more lift. But, our calculation would then become a hairy calculus problem.

Finally, we calculate the required jet trust to accelerate from 0.9v to v in 6.10 seconds.

The calculated required engine thrust is less than the F-14 Tomcat’s full thrust. So, even with the catapult speed mistake, the jet will still safely take off. This wiggle room is important, given human errors are unavoidable.

Having gone over the lift equation, let’s now look more closely at the lift variables. I’ll cram a lot of complex aerodynamic concepts into simple words. So bare with me, as I show how much control a pilot has in creating lift.

: the airplane manufacturer determines the surface area of the wings. The pilot has no control over this.

: air density is dependent on an airplane’s altitude. The higher an airplane travels, the less dense the air becomes. Then at a set mission altitude,

becomes constant, and the pilot can’t change the air density.

: the airplane manufacturer controls most parts of this dimensionless figure. This figure is a function of the following:

The graphic below shows these 3 factors.

The pilot can only control the AOA. The AOA is the angle between oncoming air or relative wind and a set assumed line on the airplane. By controlling the pitch of an airplane, AOA, the lift changes.

But if AOA changes with a certain speed adjustment, the lift may not change. Rather, the airplane will maintain level flight, as the lift coefficient changes only.

Lift Coefficient vs Angle of Attack

The relationship between the lift coefficient and AOA is best seen in the below graph.

, you increase AOA. But, increase AOA too much and the airplane will stall, and lift decreases. This is where you see the curve start to go downwards in the graph.

Every airplane has its own unique lift coefficient versus the AOA graph. The graph depends on the following: 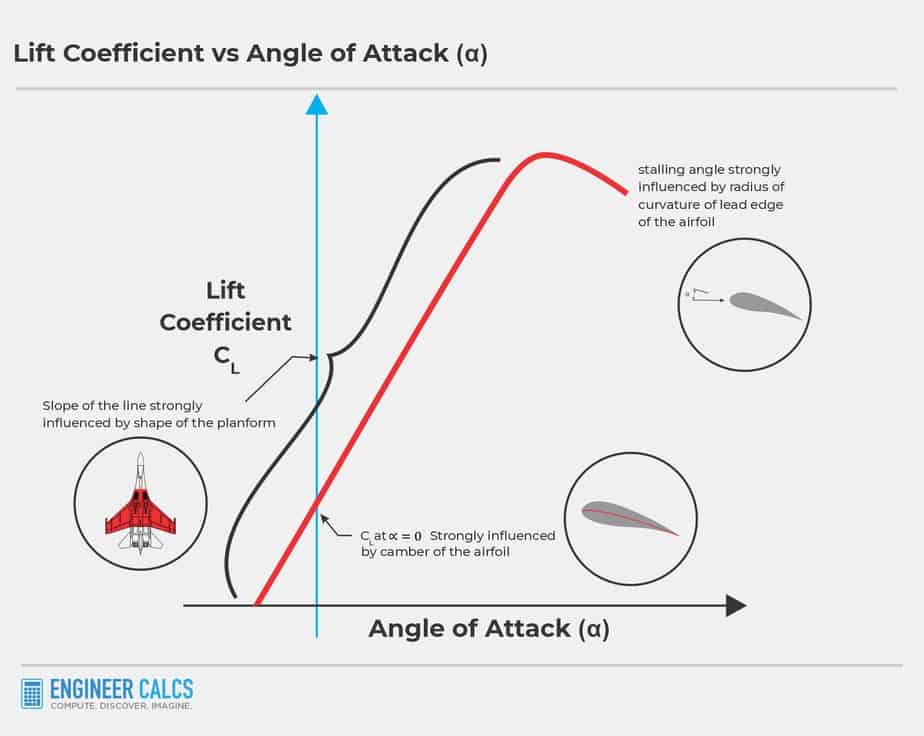 What’s the takeaway with all these lift variables?

The manufacturer controls most parts of an airplane’s lift. While many interdependent complex takeoff variables exist, as we discussed.

For example, if I increase the pitch of an airplane by 5°, you won’t know how AOA impacts lift. Maybe I lowered my airspeed as well, to maintain a constant altitude with the increased AOA.

The F-14 Tomcat forever lives in pop culture because of the Hollywood movie Top Gun. I remember wanting to become a fighter pilot as a kid because of this movie alone.

Many years later, I learned the F-14 Tomcat has many shortcomings. For one, the jet design was before computer-aided design assistance existed. This led to many aerodynamic flaws. Regardless though, it was an amazing feat of engineering for its time, and it looks badass to this day. I’m still in awe, by how machinery this heavy took off on such short 300-foot runways.