Why is Cape Canaveral a launch site? It’s the ideal location to maximize rocket speed and keep the public safe and operations efficient.

In total, there are 6 main reasons why NASA loves Cape Canaveral as a rocket launch site. I’ll discuss each reason in close detail. In return, you can better appreciate the complexities of launching a rocket.

To point out, the first rocket launch from Cape Canaveral was on July 24, 1950. And still today, this remote marshland is one of the primary locations for U.S. rocket launches. We’ve traveled to the Moon, planets, and beyond from this now famous small city in Florida.

#1 Proximity to the equator for a speed boost

It’s no mystery it costs A LOT of money to launch a rocket into space. So it makes sense to squeeze out every last advantage the Earth gives us. And one huge hidden advantage is how fast objects on Earth’s surface already move.

More specifically, the speed of objects increases the closer you are to the equator. Because angular momentum increases. In return, a rocket receives a substantial speed boost.

To illustrate, on the surface of Earth at the equator, objects move at 1,038 Miles Per Hour (mph). So a rocket prior to launch from the equator will have a speed of 1,038 mph. This allows a rocket to reach escape velocity while using minimal fuel.

In other words, the closer a rocket is to the equator, the greater the kinetic energy it’ll start with. As a result, a rocket will use less energy to reach orbit. And every 0.1% in energy savings is HUGE.

According to Harry W. Jones‘ paper, the cost of a rocket launch today is still tremendous:

With that out of the way, Cape Canaveral is roughly 1,960 miles north of the equator. Also, it’s one of the farthest points south in the continental United States. As a perspective, the following table shows the distance of popular U.S. cities from the equator:

Now, to visualize this speed boost, think of a record player. Place a coin near the center and one at the edge of the record. Both coins will orbit the center of the record at the same revolutions per minute. BUT, the coin at the edge has to travel a much farther distance in the same amount of time. Thus, at the edge, the coin travels faster.

In the same vein, every part of Earth rotates at the same angular velocity. So the change in angle over time is the same. But the linear speed of different surface spots varies at different latitudes. This is the speed in a straight line. Similarly, spin a basketball on your finger. At the poles, there’s no movement, while the movement is greatest at the equator.

This is why countries locate their launch facilities near the equator. The following table shows the proximity of other launch sites to the equator:

Important Note: Elon Musk chose Texas for SpaceX launches too. For one, the southern tip of Texas is closer to the Equator than even Cape Canaveral. Also, on the east side of Texas sits the Gulf of Mexico, a large body of water.

A quick calculation will illustrate why prograde orbits are common at Cape Canaveral. First though, to reach orbit around Earth, you need to travel 17,600 mph. And if you want to completely escape’s Earth gravity you need to travel 25,000 mph.

Just as important, the Earth’s rotational speed at the equator is 1,038 mph. While Cape Canaveral has a latitude of about 28° North. Now given this information, we can calculate a rocket’s speed boost at Cape Canaveral.

So by flying eastward in the same direction Earth is spinning, you get a significant speed boost. This will reduce your fuel costs quite considerably.

On the flip side, if you try to achieve a polar orbit from the equator, you’ll need extra fuel. Because you still need to travel 17,600 mph, but also you need to counter your eastward momentum. This course correction is why polar orbit launches aren’t typically made from Cape Canaveral.

Rockets look amazingly awesome and simple. But they’re overly complex machines that travel hundreds of miles into space. Plus, they weigh hundreds of thousands of pounds. Not surprisingly, many things can go wrong. Especially when you consider at the most basic level, rockets are just one long controlled explosion.

Thus, people in charge take many contingencies into consideration to minimize risks. The largest risk is of course people getting hurt.

This then leads us to why Cape Canaveral makes such an awesome rocket launch site. It’s located on the east coast of Florida, facing the Atlantic Ocean. And the rocket launches leverage the Earth’s eastward rotation for a speed boost. As a result, the rockets will typically end up orbiting in the same direction Earth spins.

This trajectory then conveniently creates a safety zone for launches. In other words, the rocket travel paths fall over the ocean and not large population centers. So any falling debris from rockets will splash down into the Atlantic Ocean. Also, reusable rocket parts will safely parachute down into the ocean for later recovery.

All around Cape Canaveral are easy to access waterways for transportation. This makes the transport of large heavy equipment to the site easy. Because it’s almost always easier to transport large objects by sea versus land.

For added perspective, think of land-based wind turbines. Engineers limit their physical size due to transportation limitations. For example, if a wind blade becomes too large, you can’t transport it under all bridges.

So as rockets become larger, the Cape Canaveral launch site will become even more popular. 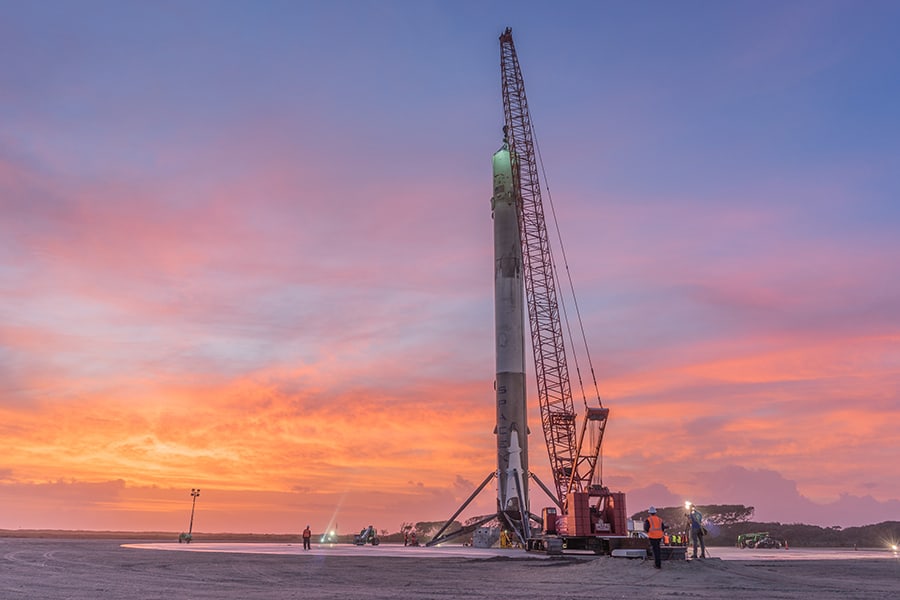 Cape Canaveral wasn’t always used to launch rockets into space. Back in 1949, the U.S. government tested missiles from the site. In fact, the close proximity to the equator and safety factor was a huge consideration, then as well.

What’s more, when NASA chose the site, it was still a blank canvas. There were miles and miles of emptiness for expansion. Yet still, paved roads existed from the Air Force missile test facility operations. This limited the required work for NASA to get the site up and running for rocket launches.

On average, the year-round weather is great in Cape Canaveral. The below table shows the average temperature for every month of the year. This great weather allows for launches year-round. Because who wants space travel to be a seasonal activity?…

According to Weather Spark,

“In Cape Canaveral, the summers are long, hot, oppressive, wet, and mostly cloudy and the winters are short, cool, windy, and partly cloudy. Over the course of the year, the temperature typically varies from 54°F to 89°F and is rarely below 40°F or above 92°F.”

To point out, there are some thunderstorms, heavy rain, and hurricanes here and there. Overall though, the weather is ideal for rocket launches.

“Why is Cape Canaveral a launch site?” wrap up

Yes, there’s land closer to the equator than Cape Canaveral. But the question is, what U.S. territory is nearest to the equator? Florida, of course!

Also, almost all other land options aren’t on the continental U.S.

So, from a business-economic stance, there are tradeoffs. But all things considered, Cape Canaveral is the sweet spot for rocket launches. It’s as if Earth handed us this location, and said use it to springboard into the cosmos.

I just hope Cape Canaveral doesn’t disappear as oceans rise, in the near future. As that’d be the only reason we’d ever abandon this treasured launch site. Because the location is simply too awesome, checking off every box you’d want in a rocket launch site.

What do you think is the most important reason from the 6 discussed? Do you think Cape Canaveral is the best launch site in the U.S. for rockets?