Despite his massive size, he remains insanely agile and fast. Imagine Michael Jordan trapped inside the body of the largest NFL tight-end player.

Zion Williamson is in a league of his own

Zion’s combination of size, strength, and leaping ability separates him from his peers. The closest comparison is Lebron James. Lebron stands 6’9” tall and weighs between 250 to 260 pounds. Even at his heaviest when playing for the Miami Heat, Lebron didn’t reach 285 pounds. 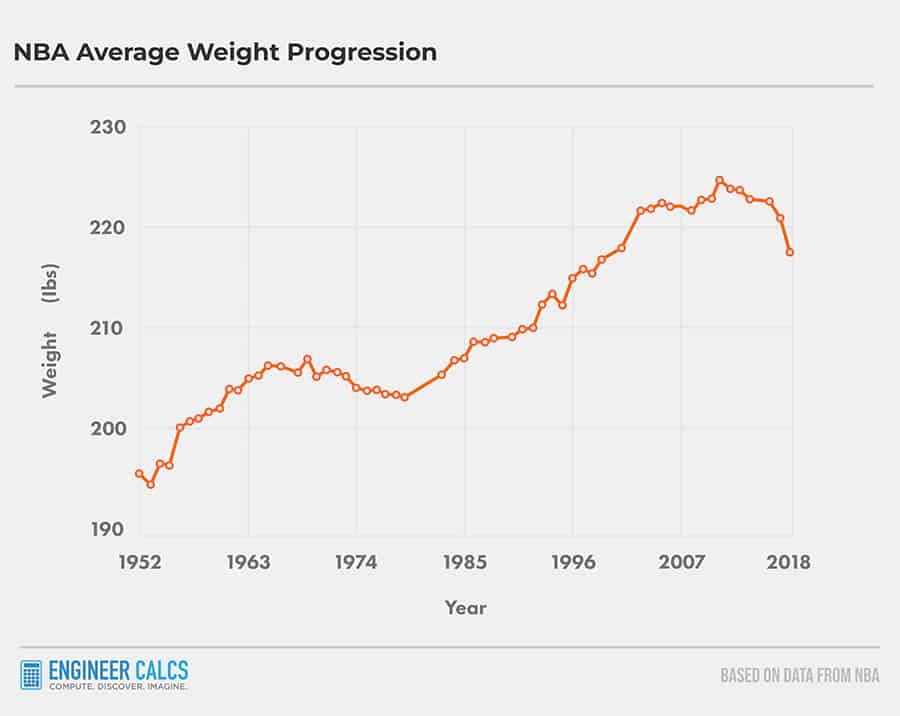 This further showcases the uniqueness of Zion’s body’s physics. He’s able to make a second jump, as his opponents still recover from their first.

So, let’s find out how much force Zion Williamson’s vertical jump generates. Because if it wasn’t clear already, you’ll see how he’s able to bully grown men in the NBA as a teen.

We’ll rewind to his days at Duke, to find his peak jumping height.

Zion Williamson’s vertical jump at Duke’s combine showed he cleared a vertical leap mark of 40-inches. In this measurement, he took a couple of steps before his jump.

For perspective, let’s review one of the greatest NBA leapers of all time, Michael Jordan. Jordan’s vertical jump with a running head start measured at 45.76-inches. The University of North Carolina made this measurement in 1983.

At the time of measurement, Michael had just turned 20, so near Zion’s age. Then around the same time in the 1984 NBA draft, Michael Jordan measured in at 6’6” tall in shoes. While weighing a slim yet athletic 195 pounds.

In height, both Zion and Michael measure roughly the same. But, Zion weighs a solid 90 more pounds than Michael did. So, Zion needs to lift an extra 90 pounds off the hardwood when he jumps.

In short, Michael Jordan has a greater vertical jump than Zion Williamson. But, given Zion’s NFL body frame, I find his jumping ability more impressive.

I’m making several assumptions in my calculations, given the limited data I have on Zion. I’ll list each of them with every calculation step.

The assumptions will also simplify the calculations, without losing much accuracy.

Step #1: Calculate Zion’s velocity when he leaves the floor

When Zion jumps leaving the floor, think of him as a projectile. In return, we’ll use a kinematic equation to calculate his upward velocity.

A kinematic equation is the study of motion, without considering motion-causing forces. These equations focus on position, velocity, and acceleration only.

= displacement, or in our case how high Zion jumps (meters)

When Zion reaches his max height above the floor, his velocity becomes 0. Here he reaches the apex of his jump, while not moving any higher. So,

Assumption: Zion jumps 45-inches, or 1.143 meters, off the floor. This is according to his college coach, Mike Krzyzewski.

The acceleration due to gravity acts in the opposite direction of Zion’s jump. So, we assume a negative value for ‘a’ or gravity, ‘g’. Where

Step #2: Calculate Zion’s acceleration while he straightens his legs

Here we calculate Zion’s acceleration right before he leaves the floor in his jump. For this calculation, we need to know how low Zion squats before his jump.

At the apex of his jump, Zion’s body completely stretches out. And from his Duke measurements, Zion’s standing reach is 8’7″ or 2.616 meters. So in the screenshot, I assumed Zion from his feet to the top of his fingers measures 2.616 meters. 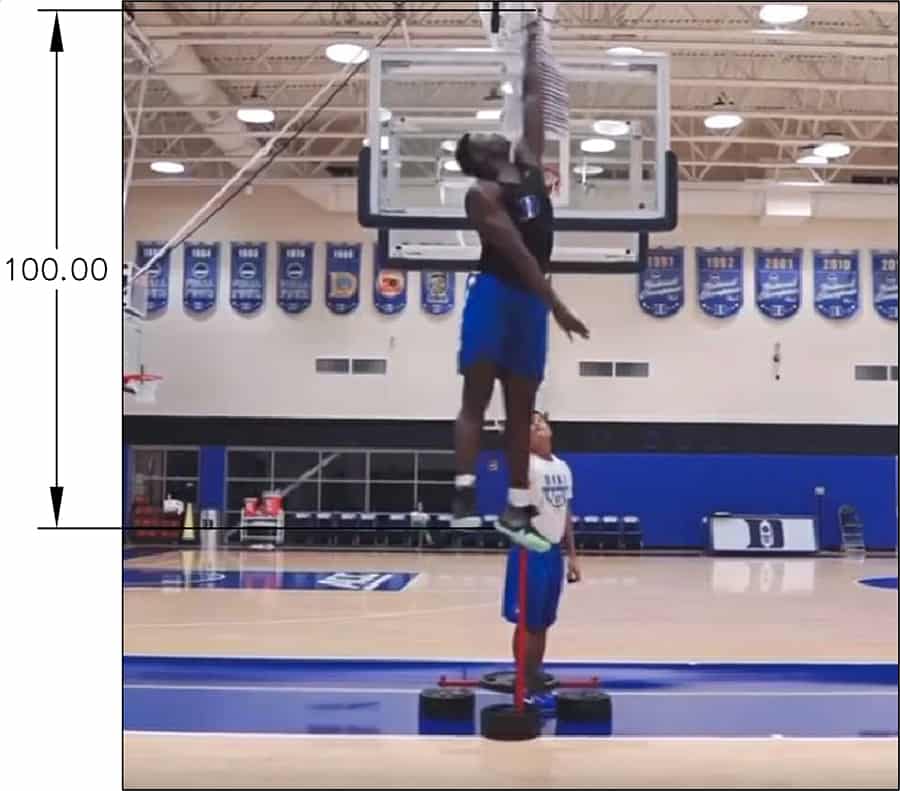 Using my unitless measurement of 100 as a guide, Zion squatted down measures to 62.38. I made this measurement using simple digital measuring software. This was possible because both screenshots have the same fixed camera angle. 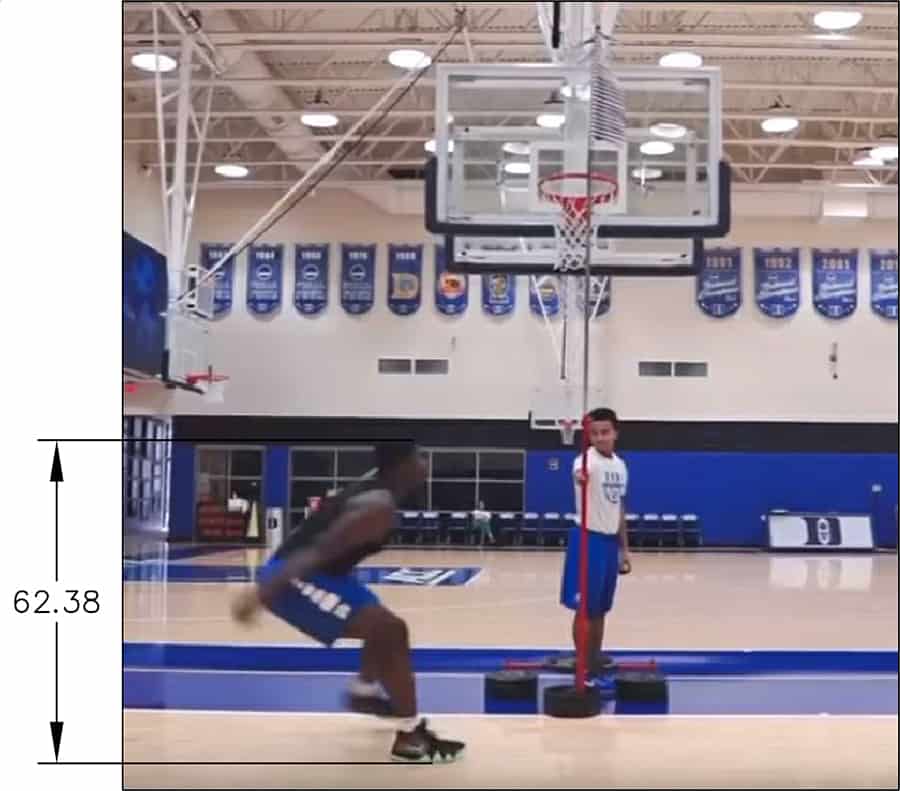 Now, we convert this unitless 62.38 measurement to meters.

Since Zion stands 6’7″ tall in shoes or 2.007 meters, we can calculate how far he lowers his body.

Finally, we calculate Zion’s acceleration as he straightens his legs. Going from his squat position to right before he leaves the floor.

because initially, Zion isn’t in motion.

Now, reusing the same kinematic equation we used before, we have the following:

Step #3: Calculate the force Zion exerts on the ground in his jump

Using our gathered information, we now calculate the force Zion exerts in his jump. We do this using Newton’s Third Law of motion. This law states for every action, we’ll have an equal and opposite reaction.

With Zion, the force applied to the floor must equal the sum of the net upward force he generates. This includes his downward body weight, which pulls him down.

Zion exerts an unworldly force of 5,134.25 newtons against the floor when jumping his highest. To appreciate this figure, we need to better visualize the newton unit.

A newton measures how much force you apply to something. The following are two examples to help you visualize:

Can Zion Williamson generate even greater force when jumping?

Zion already creates more force in his jump than I think we’ve ever seen in an NBA player. All as a teenager too. As a professional now, Zion will fine-tune his body in the following ways:

In the end, though, it comes down to basic physics. I’ll go over 2 possible scenarios of how Zion can increase his vertical jump.

If Zion can crouch a little lower, he can possibly create even more force in his jump. Think of a spring. The more you compress a spring, the higher it’ll bounce. The same applies to humans to a certain extent.

Going back to Zion’s squatting screenshot from Step #2, he can possibly squat lower. This lower squat position with his ability to contract his leg muscles fast may do the trick. Of course, the involvement of his arms and core is critical in his jump too.

If Zion loses body fat and becomes a chiseled 260 pounds, he can possibly jump even higher. He’ll have less weight to carry off the ground. Imagine a 260-pound Zion, elevating nearly 50 inches.

Michael Jordan had a 45.76-inch vertical jump back in his college days. Later in his career, his vertical jump reached a mind-boggling 48-inches. This is according to his trainer Tim Grover.

To point out, Tim was selling his Michael Jordan book at the time of this claim. So maybe, a slight exaggeration…

Can Zion Williamson’s body handle the force he generates?

The big question around Zion’s career is if his body can handle the force he generates. Not only does he jump high and land hard, but he slashes through the lane at 100 mph!

Zion’s superhuman abilities don’t come without risk. His body is built from the same flesh as you and I. Some concerning points are the following:

This all becomes an even bigger concern if his athleticism continues to improve.

Some bodies genetically can’t handle high physical activity. Not every player can have a long injury-free career like Lebron James. Lebron is in his 17th season with little to no injuries on his record.

For Zion to have a long and healthy career, he needs to do the following:

Primarily, he needs to keep his body weight in check. The higher his body weight climbs, the greater force he’ll place on his joints and tendons. The human body didn’t evolve for constant explosive jumping and slashing.

The NBA roster list in 2018-19 included only 494 total players. These are the best of the best playing in the NBA. Yet, Zion still physically and athletically sticks out like a sore thumb.

Zion is a once-in-a-generation athlete. His physical attributes make him the center of attraction on any NBA court. And as an avid NBA fan, I hope to see Zion Williamson’s vertical jump increase, as he stays healthy for many years to come.

Can you see Zion Williamson’s vertical jump increasing? Do you foresee any injuries for Zion with the way he plays?

2 thoughts on “How Much Force Does Zion Williamson’s Vertical Jump Generate?”