How to calculate wind turbine power output? It’s a simple calculation, which highlights the great potential of these white-spinning machines.

Before we crunch numbers though, let’s go over how they operate.

How do wind turbines work?

When the wind blows past a wind turbine, the blades spin. The blades are capturing the wind’s kinetic energy, and turning it into mechanical energy. Also called, rotational kinetic energy.

In this process, the rotating blades turn a shaft inside of the wind turbine, connected to a gearbox. This then leads to the spinning of the generator’s rotor, which generates electricity.

The below schematic shows the conversion of power step by step.

While the following schematic shows the guts of a wind turbine:

Important Note: the power generated by wind turbines depends on the following factors:

The following are the equation variables: 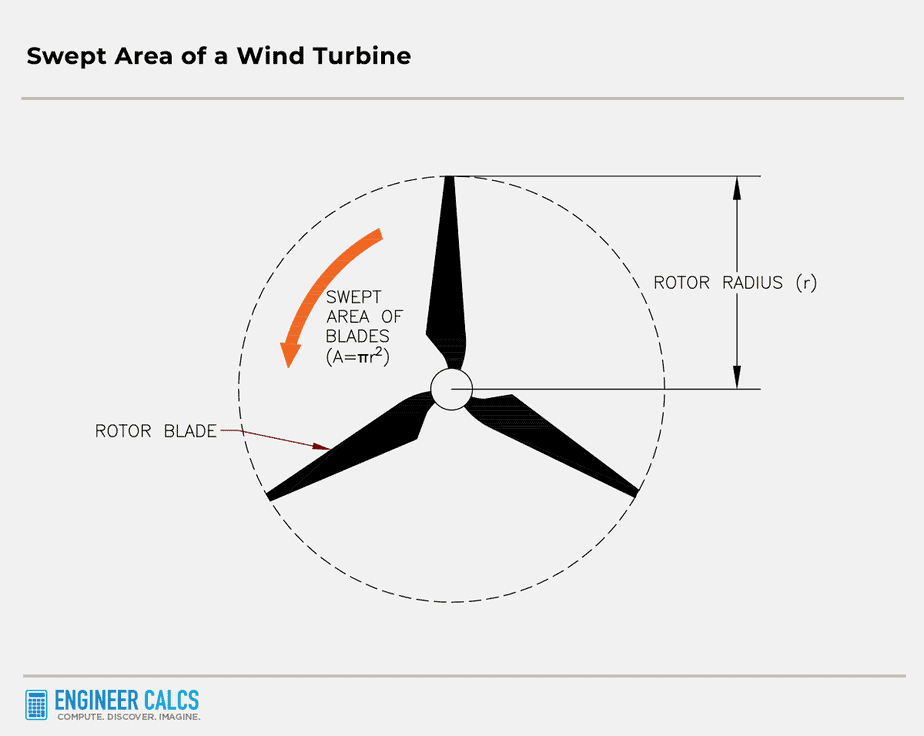 With our variables defined, we’ll now go over our equations.

Kinetic energy is defined as

While power is KE per unit of time, thus

Next, fluid mechanics tells us the mass flow rate is

While the change in mass over a unit of time, is seen in the cylinder schematic below. Where the mass flux is the wind flowing through the turbine blades.

We now substitute our mass flow rate equation into our power equation, to get

To finalize our equation, we’ll go over the Betz limit variable. 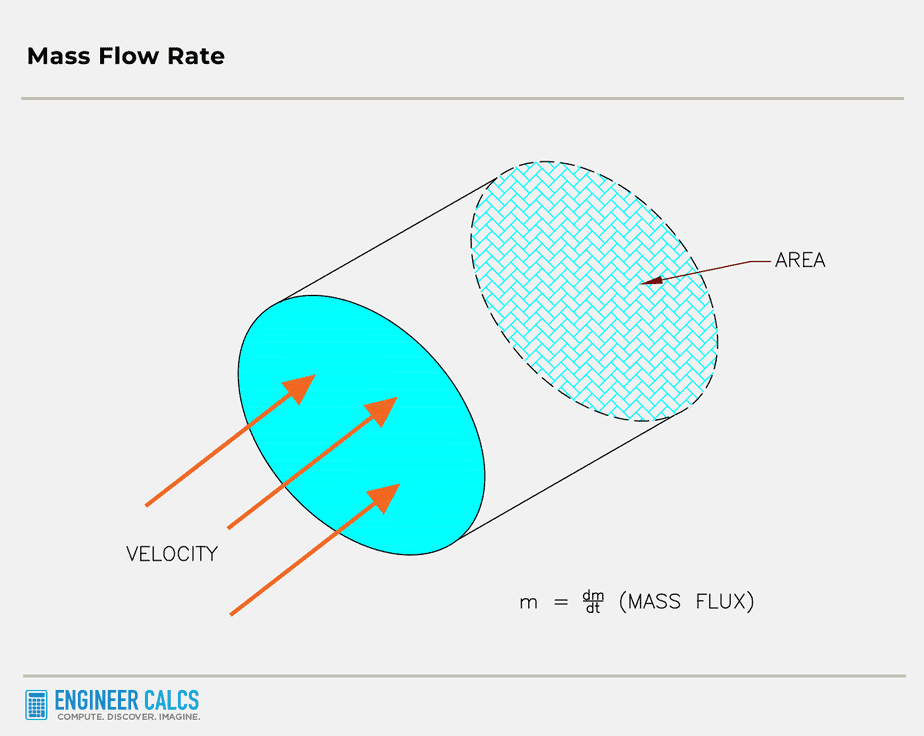 In 1919, Albert Betz, a German physicist, made a discovery on wind turbine efficiency. They can’t convert more than 59.3% of the wind’s kinetic energy into mechanical energy. It doesn’t matter how perfectly designed the wind turbine is either.

This limitation is from generator inefficiencies, drive train friction, and blade design. But also, from wind slowing down the blades. This happens as the turbine extracts energy from the wind. In return, the wind leaving the turbine flows slower than the wind entering the turbine.

For a wind turbine to operate, some wind needs to flow out from the back. If the turbine captures 100% of the wind power, the blades won’t spin. Because there’s no wind to capture energy from.

Think of the wind blockage at the turbine, like traffic on the highway. As cars slow down in front of you, you’ll eventually need to slow down too. No matter how far back you are from the traffic jam.

So, there’s a limit on the amount of air, which can pass through a wind turbine for max power output. This limit we call the Betz Limit.

With the Betz limit explained, let’s look at the Power Coefficient, Cp, below. This is the ratio of extracted power by the wind turbine, to the total available power in the wind source.

The Betz Limit is the maximum possible value of

. Because design requirements for reliability and durability reduce the

To start the calculation, we’ll use the power output from a Vestas V164-8.0 MW. This is an offshore wind turbine and is one of the world’s largest. I haven’t stood next to these monsters, but I’ve done plenty of design work for the V90-3.0 MW.

Below is a picture I snapped of a V90 unit at a project site. Look how small the guy looks standing next to the wind turbine base. Keep in mind, the V164 rotor diameter is 164 meters, while the V90 is 90 meters. 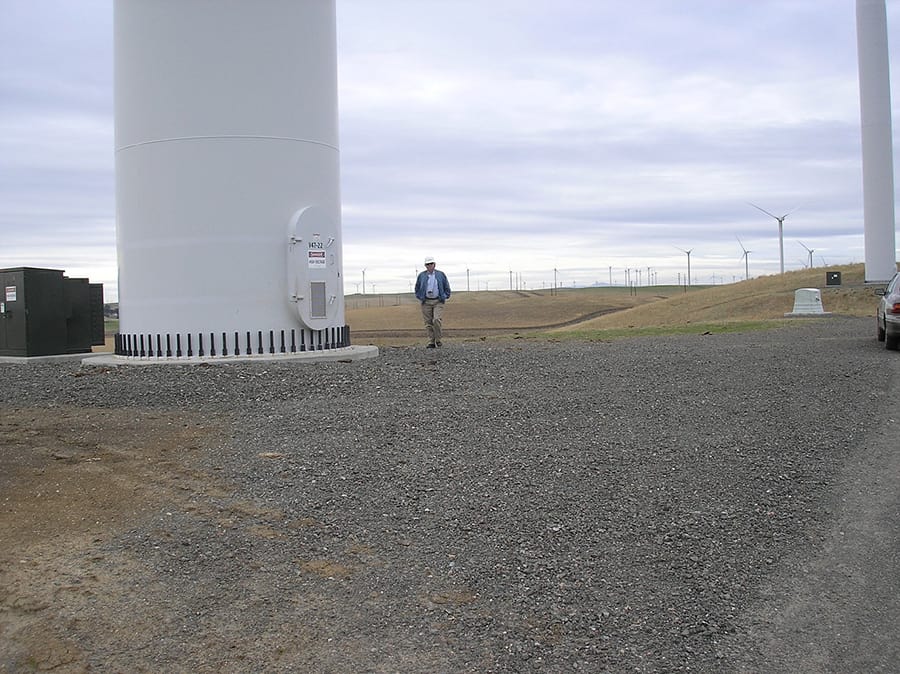 For our calculation data, we’ll use the below table data from the Journal of Physics. The data is for LEANWIND 8 MW, which relates to the V164 unit.

From the table, we’ll use a wind speed of 14 meters/second for max power output. The following then becomes our input data:

Now first, we calculate the swept area of the turbine blades.

The V164 blade length is the radius variable in our equation.

Next, we calculate the generated power from the wind turning the turbine blades.

While the rated capacity, max power output for the V164, is 8 MW. This is the amount of power the turbine can produce at optimal wind speeds.

Important Note: our calculation is only an estimate of the power output. For a more accurate calculation, we need to consider the following variables:

Importance of understanding how to calculate wind turbine power output

To learn the relationships between all the power generation variables. Then more accurately, predict wind turbine power output.

In return, this helps smoothly integrate these machines with power grids. Because power grids expect reliable power generation sources. And wind patterns are anything but consistent and overly predictable.

Even more, if you’re in the energy industry, you sell energy before it’s generated. So, the more accurately we can calculate wind turbine power output, the better.

“How to calculate wind turbine power output?” wrap up

These massive white structures look simple as they stand tall in the distance. But their design and integration into power grids are far from simple. Hence the importance of learning how to calculate wind turbine power output. And then, to better understand and appreciate these marvels of engineering.

What are your thoughts on the power output of wind turbines? Do you think the demand for wind power will further increase over the years?

4 thoughts on “How to Calculate Wind Turbine Power Output?”