Watching a rocket launch into space is amazing. But more amazing is the rocket structure analysis allowing for successful launches.

I’m going to go over the 8 most interesting parts of rocket structure analysis. You can then better appreciate how we fire large metal cylinders into Earth’s orbit. This is a distance of 100 plus miles in a trip taking only 8.5 minutes. If this wasn’t enough, these rockets weigh 6 million-plus pounds and travel 17,600 miles per hour.

You never want to leave anything up to chance in rocket design. The margin for error is incredibly small. This is why every component and system of a rocket is heavily analyzed.

When I first set eyes on the rigid design requirements in the analyses I became overwhelmed. But, it all made sense. We’re shooting a huge metal canister into space. So it’s no surprise engineers do all the following types of analysis:

Important note: the analyses changes if a rocket needs to carry humans. The changes are to account for human safety by making the rocket more structurally sound.

To expound on the analyses, let’s discuss FMECA. For starters, all aerospace companies use some version of FMECA. FMECA is the standard to good design in rocket structure analysis. It’s a reliability procedure to identify possible failure points in a rocket.

In other words, every component and system of a rocket goes under the microscope. The goal is to calculate the fault tolerance of these components and systems.

Fault tolerance: think of it as a function of three main parts. For a rocket, the parts include the following:

Then, you need to answer the following types of questions:

So a component with high fault tolerance will have a high probability of failure. This then becomes a big concern, because if the component fails, the rocket will explode. As a result, this component receives the highest level of criticality.

FoS is the safety factor used in structural analysis. It tells you how much stronger a structure is than required for a given load. And FoS values for different structures are typically found in various codes and standards.

To point out, the FoS calculation isn’t an exact science. Especially for large and complex projects. But, engineers do their best to calculate the FoS to a reasonable accuracy. Also, they use past failure data to support their calculations.

I find the FoS is proportional to your level of uncertainty over a design. What I mean is, the better you can predict your load and materials, the less you’ll rely on an FoS. So, loads are arbitrarily increased when an engineer is unsure of the max load. This in return increases the FoS.

With rockets though, it’s always preferred to use a low FoS. As a result, the structural analysis becomes more rigorous as there’s no room for error. This may sound counter-intuitive given the stress placed on a rocket in a launch. But, there’s a method to this madness.

Rocket components ride a fine line between working and failing. And the driving reason is a rocket’s weight.

In 2008,  NASA said it costs $10,000 to put 1-pound of payload into Earth’s orbit. Not surprisingly, it’s in everyone’s financial interest to keep a rocket’s weight down. For this reason alone, NASA typically uses a 1.25 FoS for expendable launch vehicles. So, these NASA rockets will fail at 1.25 times the design load. 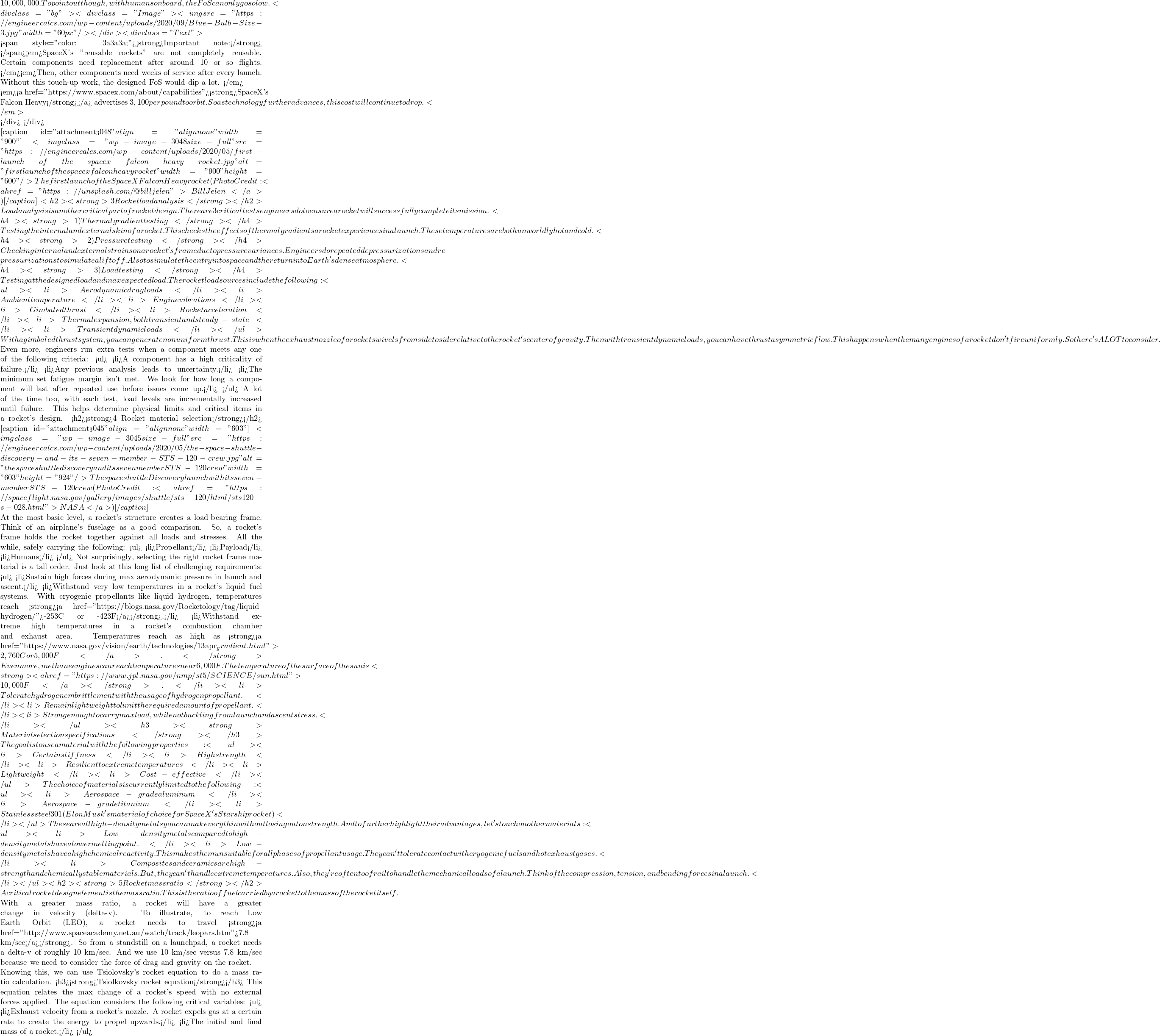 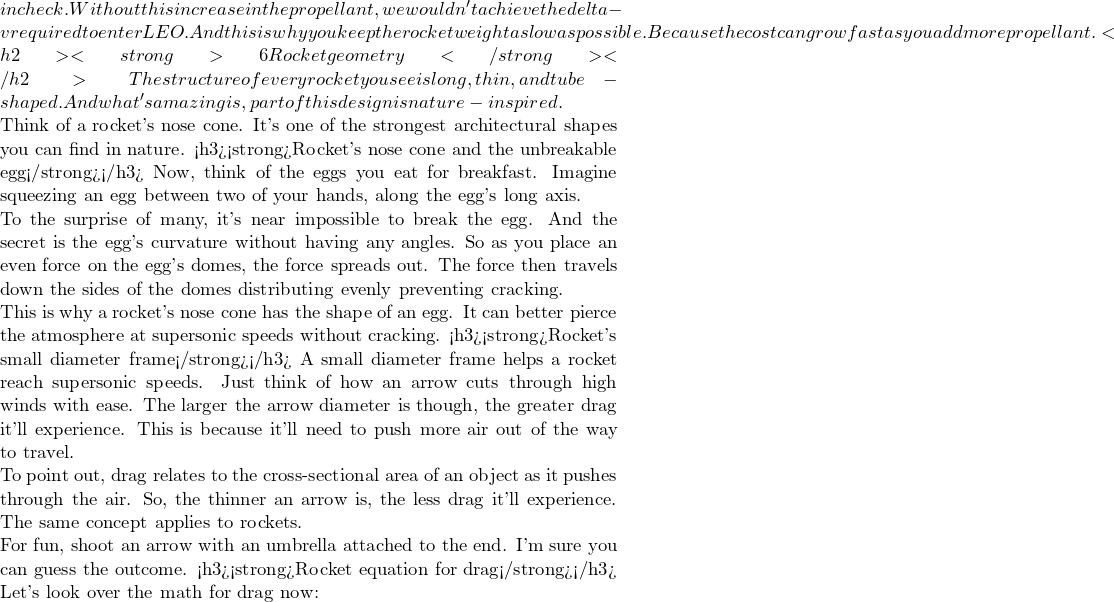 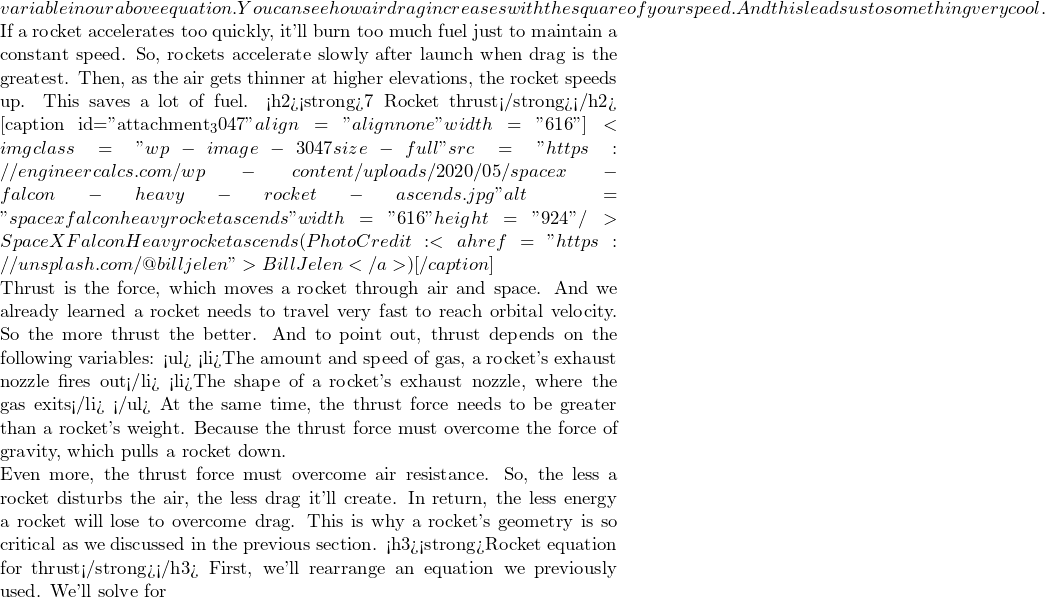 N_{t}$ increases. So, the below rocket design elements need consideration against the forces. Otherwise, a rocket will buckle as it ascends.

You know, how a muscle car vibrates as you rev up the engine? Something similar goes on with a rocket. Rockets powered by liquid fuel pump-fed rocket engines experience violent vibrations. You can measure these vibrations on the vertical axis of a rocket.

The source of the vibrations is instability in the structure and the propulsion system. The flow of propellant feeding the engines causes what’s called thrust oscillation.

To tackle this problem, NASA first began using accumulators with their engines. This helped suppress the vibrations. But, there are also vibrations in the liftoff stage from rocket engine noises. The emission of hot gases breaks the sound barrier causing shockwaves. And this isn’t a surprise, considering a rocket produces a thrust of 7.5 million-plus pounds in a launch.

In structural work, all parts will have flaws to some degree. Think of crack-like defects. And as you’d guess, the growth of cracks will over time compromise the integrity of a structure.

Think of an old building with an eroded foundation. This wouldn’t be a building you’d want to call home. In rocket structure analysis, the same concept applies. In fact, structural integrity becomes an even greater concern with rockets.

This is why fracture control is critical in controlling the effects of structural flaws in rockets. So, space programs test in different extreme environments to find weaknesses. For example, will a propagated crack lead to mission failure in extreme heat?…

A rocket is a boring-looking metallic tube fired into space. Yet, rockets are some of the most complex man-made machines. It’s an understatement to say a lot goes into rocket design. In fact, rocket design requires the use of almost every type of engineering. The structural side is only one part.

So the amount of thought and effort to make a launch possible is mind-blowing. Even more amazing is we as a society are only scratching the surface of what’s possible with rockets. And as the price of launches drops and rockets become safer, we’ll set foot in a new age of space exploration. It’s an exciting time to be alive.

What do you find most spectacular about rocket structure analysis? Where do you see rocket technology a decade or even a century from now?