How hard is electrical engineering? It’s challenging, but not overly hard. If you’re good at math and physics, you’ll learn quickly.

Truth is, everything seems hard until you get your feet wet.

Remember when you first learned how to ride a bike? It was daunting and you fell hitting the ground countless times. You then thought there was no way you could control this 2-wheel menacing machine. But after plenty of practice, riding a bike became second nature to you.

Learning electrical engineering is no different for the most part. You just need to think differently compared to most other fields. But, the learning will become easy if you study and solve A LOT of problems.

I find the key is to enjoy the process and to have an interest in electricity and magnetism. Otherwise, electrical engineering will become a near-impossible mountain to climb.

I’ve been working as an electrical engineer for over 15 years. I’m familiar with the field, and I know the learning DOES get easier with practice.

In the beginning, though, it’s no cakewalk, and why should it be? You’re harnessing and manipulating incredible awesome natural powers.

With the stage set, I’m going to go over what can make electrical engineering hard.

You don’t observe any electric phenomena in your everyday life. Heck, most everything in electrical engineering you can’t see.

For example, you can’t see electric and magnetic fields and wireless signals. Even at the basic level, you can’t see the electrical current moving through a circuit. When you’re out and about, you just see a bunch of wires mounted on poles.

This alone illustrates the high level of abstract thinking involved. Thus, a lot of electrical engineering, in the learning phase at least, isn’t intuitive. For this reason, you need to use math to understand what’s going on.

Imagine a long circuit run from a power source to a load. You’d need to do a voltage drop calculation, to be sure your load will still operate. Through visual inspection alone, you’d never know something would be wrong.

In other engineering fields though, you can see and touch many things you design. For example, think of the designs made in the structural engineering field. This makes the conceptualization of concepts much easier in these branches of engineering.

Overall, as an electrical engineer, you need a strong foundation in the basics. This will allow you to easily visualize electrical concepts in your mind. I find this to be key in high-level mistake-free design work.

Important Note: many electrical analogies make the visualization much simpler.

For example, let’s use a water analogy to understand why voltage drops when you start a motor. Imagine a large motor load connected to the circuit that powers the lights in your home.

Now say you’re taking a shower and then someone flushes the toilet. All of a sudden, you notice the shower water pressure drops. This happens because a single water pipe feeds both your toilet and shower.

Similarly, think of voltage as electrical pressure. Voltage pushes current through an electrical line. So with a high current draw from the motor start, the voltage drops across all circuit loads. This is why your lights may momentarily dim when the motor starts. 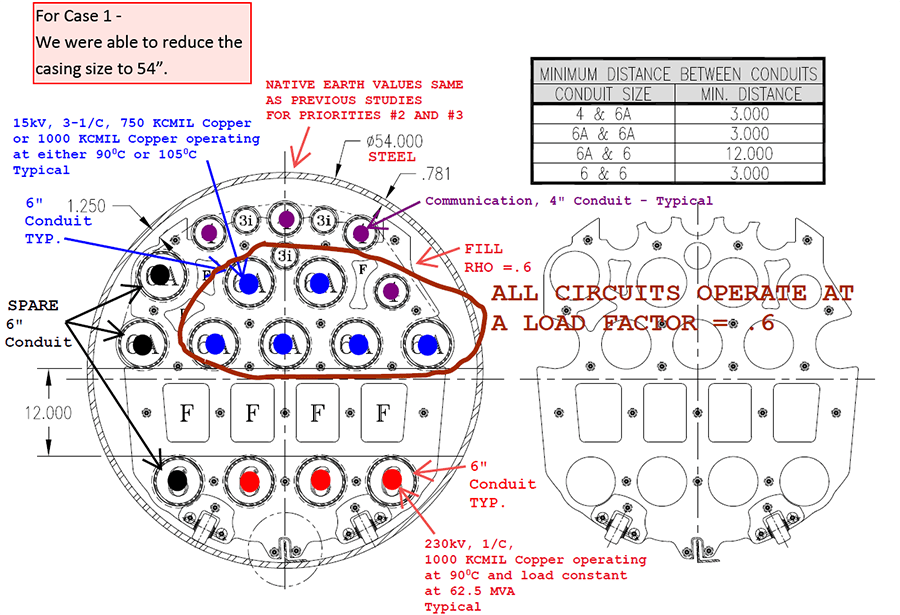 You need strong engineering theory and practice skills to maximize your potential.

Once you start working as an electrical engineer, you can’t forget engineering theory. Especially when doing complex cutting-edge design work, where you can’t recycle cookie-cutter designs.

In fact, a lot of electrical design work in the real world requires mastery of theory.

Inside this pipe, there were some conduits with 3-cables inside. These cables weren’t problematic, as their magnetic fields essentially cancel out.

But, cables run singly in a PVC conduit were potential problems.

Imagine a magnetic loop forming perpendicular to the PVC conduit from rebar in a duct bank. The magnetic field from our singly run cable will induce a current in the rebar in the duct bank. This induced current will then cause heating and act as a parasitic load on the cable.

This was an issue that had to be carefully considered in the project design. Because rebar is commonly used in duct banks for reinforcement.

So not surprisingly, you need a strong background in electrical theory. Otherwise, you wouldn’t even know this issue exists.

What’s more, this was only one of many issues we had to consider that involved electrical theory. In short, without mastery of theory, you can cause tens of millions of dollars in damages. Or even worse, someone can badly get hurt.

Important Note: you can get by, by not using much theory in the professional world. But, you won’t get to do very interesting work, and you’ll never maximize your career.

Usage of high levels of math

While studying electrical engineering in school, you use quite a bit of math. The following are some of the types of math you’ll use:

I can go on and on. The point is, you use A LOT of math, more so when you’re in school.

A lot of the math can seem foreign to you too. It’s difficult to wrap your head around some of the abstract mathematical concepts. For example, the use of partial differential equations in solving electrical circuit problems.

Important Note: in the real world engineers use much less math than in school. In the real world, you use more basic math. But, it’s still important to understand complex math concepts to some degree.

Your interest level in electrical engineering

If you don’t have an interest in electrical engineering, learning the material will be a HUGE drag.

I’m not talking about a slight interest either. I mean you think a lot about electricity and find it to be cool. I know I think about electrical subjects and engineering in general A LOT!

So, if you check off the interest box requirement, you’re ahead of many of your peers. Because many people only become electrical engineers for money and other superficial reasons.

To point out, in school you’re taught a lot of what you may find to be challenging. But, the meat of your knowledge you’ll gain in the working world on your own. You’ll need to read books, research on the internet, and speak with senior engineers to level up. If you only depend on what you learn in school, you’ll be in a world of pain.

All in all, I find self-studying trumps formal education in most instances. And the only way you’ll self-study hairy subjects is when you have a deep interest in a subject.

Is your mind wired to think outside of the box? If no, electrical engineering can be hard to master, even if you have a deep interest in the field.

You need to have a certain level of creativity and visualization abilities to excel. I’m not saying you can’t become an electrical engineer if you can’t look outside of the box. But, you won’t lead challenging cutting-edge engineering projects.

For one, take a look at the engineering creative process for the Golden Gate Bridge. This case study will help you understand the real-world creative engineering process.

At the same time, you’ll find a lot of intuitive creativity comes from boatloads of experience. I know over the years, I’ve leveled up my creativity through A LOT of gained experience. As a result, I’ve been able to come up with solutions and connect the dots much faster. Thus, a lot of what we call “creativity” comes with practice.

I will say though, there are levels to engineering aptitude. No matter how much experience you have, you’re not going to become the next Nikola Tesla if you don’t have “it.”

“It” is an innate maestro ability only a few have. To be blunt, not all engineers are geniuses, far from it. And you know what, that’s totally okay.

What’s more, check out 20 tips to improve your creativity to further level up.

“How hard is electrical engineering” wrap up

If you’re just getting your feet wet in electrical engineering, be patient.

The learning process takes time and you need an open mind. But once you get in the groove of things, everything will fall into place.

The key is to learn the fundamentals, and then the complex concepts will become much easier to learn.

Plus, you’ll have a blast learning about so many cool things. Your mind will also open up to a whole new awesome world of thoughts and possibilities.

Heck, you can even try to figure out how black hole jets form from magnetic fields.

And the icing on the cake is that the future for electrical engineering looks bright!

What are your thoughts on how hard electrical engineering is? Do you think electricity and magnetism are hard concepts to grasp?